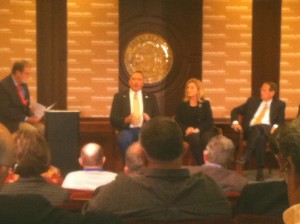 A panel at the Idaho association of cities meeting discusses management of public lands.

Over the past few months I have received several comments regarding management of federal public land in Idaho.  As many of you know, upon statehood, the federal government transferred ownership of some land to the State of Idaho.  The Income from these state lands is to be used for the benefit of public education.  However, the federal government retained ownership of approximately 63% of Idaho’s land.

Over the years, including this year, legislative proposals, in Idaho and other states, have been made advocating the transfer of those federal lands to the states.  Concern has been expressed by some that if transfer were to occur, it would either degrade the lands or limit their availability to the public.

However, it is important to note that over the years Idaho State land has been managed well, sometimes better than the adjacent federal land.  For example, 90 percent of the wood milled in Idaho comes from state and private forests.  Also, Idahoans do have multiple opportunities to use state lands for a variety of purposes.  Regardless of who controls the land, state government, federal government or private ownership, responsible stewardship is critically important.

Because no one in Idaho wants to see our valuable federal or state public land degraded, it is critically important to continue the search for ways to allow the citizens of Idaho to be more involved in the effective management of all the public land within the state.   The legislature this year, with passage of HCR 21, provided for an Interim legislative committee to study this issue.   I supported creation of this committee and look forward to its report.  Also, HCR 22, stating findings of the legislature and demanding the federal government transfer all public land within Idaho to the State of Idaho, was also approved by the legislature with my support.

Please review HCR 21, HCR 22 and all 2013 legislative actions at www.idaho.legislature.gov.   As with all issues, please give me the benefit of your comments regarding management of our public land at www.tomdayley21b.com  or tdayley@house.idaho.gov